Edit
Welcome to the Bull Wiki!

We are a free repository about Bull, a television series created by Dr. Phil McGraw and Paul Attanasio. We are currently editing over 286 articles, and you can help!

Bull stars Michael Weatherly as Dr. Jason Bull in a drama inspired by the early career of Dr. Phil McGraw, the founder of one of the most prolific trial-consulting firms of all time. Brilliant, brash, and charming, Dr. Bull is the ultimate puppet master as he combines psychology, human intuition, and high-tech data to learn what makes jurors, attorneys, witnesses, and the accused tick. His personal life proves harder to manage as he tries to live a healthier lifestyle following a heart attack and learns he is expecting a child with his ex-wife.

Bull employs an enviable team of experts at Trial Analysis Corporation to shape successful narratives down to the very last detail. This includes his quick-witted former brother-in-law, Benny Colón, a lawyer who acts as defense attorney in the company's mock trials; Marissa Morgan, a neurolinguistics expert from the Department of Homeland Security who monitors shifting jury reactions in real-time for Bull; former NYPD detective Danny James, the firm's tough but relatable investigator; Taylor Rentzel, a working mother and former colleague of Marissa's who is an expert in coding and computer hacking; and Chunk Palmer, a former all-American lineman and stylist-turned-law student who helps clients prepare their look and testimony for trial.

In high-stakes trials, Bull's combination of remarkable insight into human nature, three Ph.D.'s and a top-notch staff creates winning strategies that tip the scales of justice in his clients' favor.[1] 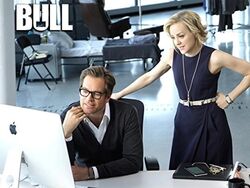 "The Necklace" is the first episode of the first season of the drama series Bull, originally aired on September 20, 2016. Dr. Jason Bull, a divorced psychologist and expert jury consultant, is hired to help defend the son of a millionaire who had sex with a drug-dealing girl from his school. When the son is accused of murdering the girl, Bull must use his skills and technology to deduce the intentions of the jurors, his client, and everyone else involved.

We're an encyclopedia run and maintained by people just like you! Created by fans, for fans, this community is dedicated to building a comprehensive and informative guide to the CBS series, Bull.

Need help building out this community?

You can also be part of the larger Fandom family of communities. Visit Fandom's Community Central!

Go to these sites for info or for help with your own wiki!

Community content is available under CC-BY-SA unless otherwise noted.
Advertisement